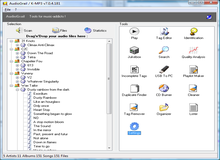 Giveaway of the day — AudioGrail 7.11 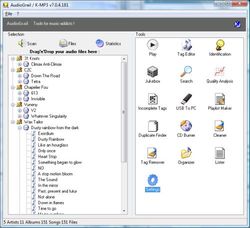 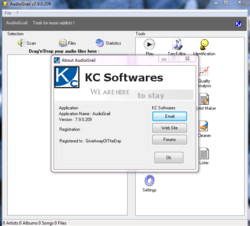 AudioGrail (Formerly K-MP3) is the best solution to work with audiofiles, such as MP3, OGG, MPC etc. Rename and tag your files (add artist name, album, title etc.) automatically. The program can organize files on your system, analyse their quality, find duplicates and improve your audio experience.

How would you improve AudioGrail 7.11?
All ideas (0) Top five ideas Searches Leave feedback
No similar feedback found. Feel free to add yours!
Leave feedback Go to the project page ›

.
I get many errors that are not fatal, at least they are in French, so they are entertaining.

It claimed that a few song files do not exist, but I see them and they play in Windows Media Player fine.

A couple of songs appeared as gibberish, but the program could not help me identify what they should be named.

However, the program allowed me to Play the gibberish-titled songs, and then, in Windows Media Player library presentation, I could right-click on the song being played and ask for Properties, which showed me the actual [ filename ] being played ( AudioGrail could not do this on it's own ), which I then highlighted and copied, and then pasted the real artist and the real song title into AudioGrail to replace the gibberish ... an around-the-corner solution.

I also use Zortam and Musicbrainz Picard and Windows Media Player ( ! ) ( and Windows File Explorer and Advanced File Renamer and 1-4-All Rename ).

These programs are just one of many tools I use on my libraries, none of these tools are perfect and complete and total managers, all of them need each other one way or another.

So I see AudioGrail as only one tool in my tool kit.

It's not intelligent, in that it cannot intelligently discern between the "&" in "Frank Sinatra & Fred Astaire" versus the meaning of "&" in "Jack Dempsey & His Orchestra", where a search-and-replace for the "&" would be different in each case, making "Frank Sinatra, Fred Astaire" appropriate as performers, but "Jack Dempsey And His Orchestra" a different appropriateness as performer, each replacing "&" differently -- until such savvy is available in an automated program, I will always need a vast array of different tools.

Considering that all library files have 4-ish qualities, times 2, why not respect this and honor this and have it front-and-center in the program?

The 4-ish qualities are:

"Times 2" meaning this appears once externally in the operating system [ filename ], and again in the file's [ metadata ].

There is no identification of what AudioGrail is showing us in it's loaded song list.

They should agree, and inform each other, intelligently, with MY preferences settable and applyable through any filename/metadata editing program.

Hence the need for other tools.

-- What does "Statistics" do, aside from waste my time and produce no results?

-- "Scan" scan the operating system for files, it does not scan the displayed list of songs for anything.

-- I cannot select more than one song at a time, so how do I search, sort, and select groups of songs to take action on as a related group?

-- I had nothing highlighted, then I clicked "Identification" and it asked me about all songs in the same album ( ? ) ... and then wasted my time searching and eventually finding nothing .. what for?

-- "Quality Analysis" means what? ( Tt means bitrate and sample rate, not quality. ) I cannot right-click on any song in the results and do anything with it, but apparently I can highlight a song and move or delete it ... but I'd probably like to downsample all unnecessarily large songs, or find better quality versions of low-quality songs, how about using "Quality Analysis" for that? In the next version of audiaGrail, perhaps?

-- Results windows are not resizable ( why did I but a big screen then ? ).

-- Results windows lead to editing the tags in only the results, such as using the "Incomplete Tags Finder" to search for songs with no "date", then clicking on a song open the tag editor where ">>>>" ( next ) included only the results of the prior search.

-- "Duplicates Finder" did not identify if there is any difference between then duplicates, and I can't right-click on a result and see it's properties or open it's location, and it did not find actual duplicates where the song appeared twice, but one faded in, and one had "(2)" in the file name, but otherwise they were was identical, one just being "better" than the other ( by being more complete, no fade-in ) -- "Duplicates Finder" appears no more sophisticated than a simple file-size comparison, beware.
__________

Here's a possible use:

1 - In AudioGrail, check "Incomplete Tags Finder" for "Artist", "Title", and "Year", and then note the exception COUNT -- how many are still unidentified? You cannot move all the songs to a separate directory for further processing in AudioGrail or in another program, drat!

2 - Using other programs, try to complete the missing data in ALL files ( because AudioGrail's specific sub-set of results are not available to other programs ).

3 - Return to Audiograil and check again for incomplete tags.

4 - Repeat until there are no incomplete tags, using any other program, including manual search on the web, Google, Wikipedia, wherever, to complete the tags that you care about that are now still empty.

That's a lot of manual labor ... for an automated program to not actually do for you, but only help you do on your own, as a supplemental tool for other programs.

Hence, AudioGrail is a keeper if only as an auditor of the results of other [ filename ] / [ metadata ] editing tools.
.

So both programs today are epic fails. I load AudioGrail and scan my music folder & everytime I get an error message with zero music files loaded even though I have thousands. Useless.

I have been looking for a program that can auto-tag a song automatically with 1 click such the program looks up the song title (and may use any existing tags for help in identifying the version) and suggest tag fields to be filled.
Does this program do that?

I've been using Jaikoz for some time. It works pretty well. My music was a mess! I like how it has the option of reading the music's acoustic ID to identify the song, even with missing metadata.
http://www.jthink.net/jaikoz/

It is incorrect if the developer does not follow the product questions and does not respond to them.
I do not even feel like littering my system with trial installations. Then I can come to look for Gotd-cleaning gossip!

TO THE DEVELOPER:
Before I install, please let me know: Does this installation also include Relevant Knowledge?

Elsewhere online I found comments that the commercial version includes Relevant Knowledge. Please let me know if this one does too, and if so whether installing it is optional.

In addition to my question above, please also let me know ahead of time if it also installs DealBuildlog Toolbar or any other software in addition to AudioGrail.

I'm not the developer. I don't remember ever seeing this developer respond here, though they may have, but as far as I know, if you downloaded it from their site in the past, the installer, and this included most of their installers, most likely contained Relevant Knowledge, or something else. If you got the installer here, from this actual giveaway page, it did not. Today's does not, but I didn't install it, for I don't need it. But it looks like they may have cleaned up the software trials on their site as well, finally, unless what isn't wanted is now well hidden, but today, the installer for this particular offering is the same size both here and on the developer's site. With unwanted additions, it was not.

Oh, and installing it was not optional, even if it said it was - I can't clearly remember if it gave a choice, but if it did, it didn't listen to your choice. I did look at several of their trials once, and all I know is, it wasn't optional, but it did clearly state that it contained it, so you had the choice to install it or not, complete with whatever you agreed, or did not agree, to also install. Some installers had it, some (mostly zips that I don't see any more) didn't. HOPEFULLY, they have stopped doing this on their site with all of their software.

Both Relevant Knowledge and DealBuildlog Toolbar are terrible things to install. I would like to try AudioGrail, but unless the developer promises us hat those are not included, no one should be downloading it except on a PC they do not care about that is associated with a fake identity.

Nebulous, No RK (and RK is no longer proposed with any products of ours)

@Kyle Katarn, thanks for taking the time to reply.

Am I to infer that DealBuildlog Toolbar or a similar toolbar will be installed?

Nebulous, no, as long as you are using genuine installers from our web site.

I keep seeing "Rename and tag your files (add artist name, album, title etc.) automatically" (here and on KC Software's webpage) but I'm not finding the source of such info. What is the info source for the tags and filenames?

Trying 2 b Helpful, I'm guessing that you are supposed to put whatever you want in there. For example, if it's a song by your favorite band, put the and name, song title, maybe album... If it's some audio clip you found online and have no idea, you can put in whatever might lead you to remember what clip it is. Maybe a description like "gunshot at the cuckoo clock".

If the program wants to do that automatically, it should already know of a data source and, if it doesn't, you'll need to do it manually instead.

Defender Heroes: Castle Defense - Epic TD Game
Use the power of the bow and crossbow to defend the realm and the kingdom from attacking enemies.
$1.99 ➞ free today