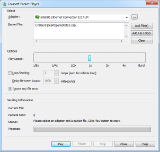 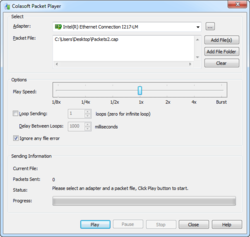 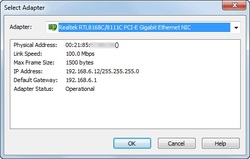 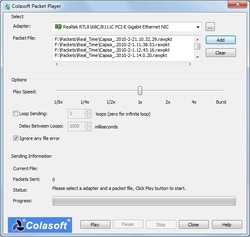 Colasoft Packet Player is a packet replayer which allows users to open captured packet trace files and play them back in the network. It supports many packet trace file formats created by sniffer software such as Colasoft Capsa, Wireshark, Network General Sniffer and WildPackets EtherPeek/OmniPeek, etc.Except sending packet files in original interval between loops, Colasoft Packet Player also supports sending packet files in burst mode and defining the delay between loops if the loop count is more than one.

- If checked, Colasoft Packet Player will send packets one after another without wait. If users want to send packets in its normal speed, leave this option unchecked.

- Specify the interval between every loop.

duplicate a pcap and edit/modify for replay

I will say modern encryption algorithms aren't getting brute-forced by anybody as it's not a sensible thing to do. (Back in the day, i.e. pre-PGP, only Govts. did much work on encryption, now lots of people are and so stuff is extensively tested by people who know what they are doing.) Yes if the NSA had a message with the code to disable North Korea's nukes they'd give it a go, but they aren't setting $100M of hardware to run for months in a almost certainly futile attempt to read what you last said to your GF. Well unless Trump really fancies her anyway...
Against that implementation errors have proved an easy route into encryption systems using solid algorithms, but failing that it's much easier to hack someone's system and steal the data or password if you're the Govt. Also the people providing the encryption may have a way round it at the time you send the message (e.g. WhatsUp).
As a rule using the mobile data system on your phone is secure from people at your end (data plan permitting). Using public WiFi isn't unless you use a VPN (which is a long story).

Sorry, that was in response to HardGirl, no idea why it came up here...

The program can't find an adapter. What is an adapter and why don't any show up?

Therese, a network adapter. If you don't know what one is, you don't need this.

Therese, run the program as an administrator and it will probably find the adaptors it was noted during last giveaway of 1.3.1 pro that 1.3.1 found adaptors without running as an admin but version 2.0 free which is what this giveaway is based on needed elevated rights to see the network devices!

JDP, well, I have two network adapters on my computer but for some reason, the program isn't showing them. That's why I asked because it doesn't seem to work and the program does not have any option to manually select them. The dropdown box isn't good enough for the purpose. I would suggest the programmers might put in a way to select the adapters, maybe from the device manager built into Windows.

Can this be used to test a network replay attack? If I understand correctly, if I have poorly coded apps or apps with poor session management and token passing, I should be able to replay authentication streams. My use case would be to test my web apps to make sure I don't 'pass the cookie' poorly.

Does this require network adapters to support promiscuous mode?

NothingSoStrange, Yes a network replay attack is basically what this does and nothing other than resource depletion testing.

From what I understand of Promiscuous mode, it should not be necessary unless you are trying to spoof a different IP number and even then it does not intelligently process replies but just replays the externally recorded session blindly.

Reading the replies to hardgirl, I'm still none-the-wiser about its purpose. Just one or two short, introductory sentences would help. Does it protect against malware? Does it encrypt your data? (I suppose that in brief, if you cannot work out what it's for, you don't need it.)

I have a particular question, which would cause me to hesitate even to fiddle with it and learn by trial and error. Does it chew up data allowance, in the same way that upload/download speedtests do (not something many people seem to be aware of)?

Thank you. Pardon my ignorance.

Bill, if you don't understand it, you don't need it. It's a niche product for a relatively small number of users (who would know what it is).

I have to thank you for this awesome software, what a great deal this is for all of us!!!


Pssssst.....what the hell does this software do, and who needs it?

Thanks for this timely info. I don't blame you for the days later response, and I did not install this on my computer because I have no clue what it was going to do to it if I did. My original comment was basically in jest, and I had no plans to install such a complex, dangerous software that is way beyond my current capabilities. I am glad they made the offering, obviously there are people out there that know what it all means, and have a purpose for their situation. I just don't think it was meant for a casual user like I am.

Back in the day, when I was rescuing friends computers, laptops, etc. I thought I was the man. In time though, I realized that I don't know nearly as much as I thought I did. I can build a computer, with is easy. Find problems/viruses and clear them, and get a computer working again, but that is usually all based on the functions of software, that I know NOTHING about. They did the work, I just pushed the buttons and clicked the "next" and "yes" a whole lot. I have not been doing that for some time, and things have obviously changed, I am lost on win10 right now. It might take time, but I will try to become the mega tiny problem solver again, and I am going to leave that bar very low. Products like this, are out of the picture for me. I would rather spend my time doing things that are more rewarding, less frustrating.

Thanks again for the reply, it was indeed timely and useful.

Please put this requirement on your program blutp so that all can see it. I will not sign up to any social network for any kind of program.

Can this be used to record online videos on the fly? Or to find downloads that are otherwise hidden? (Like when a company specifies their own downloader instead of one's web browser).

Therese, No it blindly replays packets captured with a completely different program NOT supplied in this giveaway. This records or captures nothing!

Therese, no, nothing to do with downloading videos.

FYI, I already have the free edition and tried to install this Pro GAOTD but the installation fails. No problem, the free version is okay for me.

An earlier pro version was given away 8th August 2016... functionality of that and this are very similar.

Can anybody tell me what does this app do in layman term? I feel like i need more encryption before i send my bathroom photos to my bf?

Hardgirl, If you use a network monitoring program to record traffic going out of a network adaptor (e.g. your WiFi) you can take the recording (e.g. by Wireshark, which is free) and have this program play it back out the network adaptor of your choice. Limited general usefulness, but some people doing test/debug could like it a lot. Can also speed some things up or simplify them (e.g. if it takes a long time to configure something by hand you can record that and replay it to the next one).

JohnL, thanks a lot. How to avoid being wifi recorded?

Hardgirl, Send encrypted, lots of messaging Apps do this by default

bob, of course that does not prevent the encrypted packets from being recorded and then decrypted offline!

If the need to know is great enough, no conventional encrypted communication is 100% secure. Especially when nation state resorces are used. The only way to avoid wifi being recorded is don't use wifi!

TK, Thank you. What if i use cable internet and turn off wifi? Can it be safer?

hardgirl, safer from drive by packet sniffing but not safe from ISP employee sniffing or others with access to major routing machines in between you and the internet. Never put anything on a digital device you cannot afford to be stolen and survive it being used in the worst way possible.